I’m old enough to remember back, many years and several incarnations of political correctness ago, when elders who suffered from Alzheimer’s or other forms of senile dementia were referred to as experiencing “second childhood.” I still like using the expression, because I think it is instructive in several respects for those facing the challenge of helping parents or other loved ones who are dealing with those conditions. 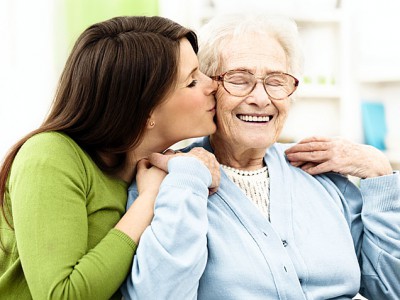 The first thing we need to realize is that it is our role and responsibility to protect vulnerable elders from harm, just as we do our children. Sometimes that needs to mean “putting our foot down” even if we realize that the child, or elder, won’t like it and will likely offer some push-back. For example, for the same reasons we would not dream of letting a 10-year-old child drive a car, we need to realize that elders whose dementia has rendered them unable to safely drive should be viewed, and dealt with, in the same way.

That said, Mary Poppins was right on the mark in suggesting that “a spoonful of sugar helps the medicine go down.”

It takes some practice and a lot of patience, but if being firm is accompanied by loving words and gestures and not expressions of anger or frustration, you’re more likely to succeed in securing the cooperation you want. That’s true in dealing with elders as much as it is in raising children.

Beyond that, we’re not beyond telling our children the occasional “white lie” as to why they can’t do something they want to do, in situations in which that offers a gentler solution that “just saying no” or getting in an argument with them when we know that, for their sake, they can’t have their way. That works with seniors with dementia as well. For example, explaining that “the car keys are lost” or “we had to take the car into the shop, and the part they need to fix it is on back order,” even if those aren’t really true, can be an effective way of starting the process of transitioning an elder with dementia away from driving.

Although it’s good to give our children reasonable choices, because it’s important and respectful for them to have some say in decisions affecting them, we also realize that we need to limit those choices to assure they make good ones. Given an open-ended choice of what to have for lunch, many children would pick something along the lines of “candy and ice cream.” But if the question is “which vegetable do you want with lunch, carrots, green beans or salad?” we know that a good choice will be made. That same approach can be applied for elders with dementia for issues ranging from nutrition choices to getting appropriate medical care to long-term care arrangements.

As the old saying goes, in order to get the boss to do something, you must first convince the boss that it was her idea. If a bad choice is offered up by a child or an elder, you don’t need to be critical, or to assume the discussion has reached a dead end. Just say, “Well, that’s one possibility, have you thought about any others?” It might take a few “What about …?” questions, but if and when “the right answer” finally comes out of the elder’s mouth, you can then react by embracing, encouraging and supporting it. And you will have asked, not told.

We also limit our children’s responsibilities to what they can handle, often without even thinking about it. We might trust our children with ten or twenty dollars in spending money for a trip to the zoo or a movie theater, but we wouldn’t give them a credit card and hope for the best. Elders with dementia are similarly vulnerable, especially when it comes to things like home shopping shows on TV and requests from charities with whom they have no connection other than being on a mailing list the charity purchased.

Sometimes we make promises to our children that are really intended as a statement of our best intentions rather than some sort of contractual commitment. More sleep-overs are initially promised than carried out, because sometimes we need to react and respond to later developments that make us realize that allowing the sleep-over is no longer a good idea. A promise to “never put you in a nursing home” needs to be viewed in the same way. It’s a worthy goal, not something that overrides our ability or responsibility to assure that, if the circumstances warrant it, our loved one will be in a safe place and well cared for, even if that’s no longer at home.

I hope that in reading this, other ideas and similarities come to mind. I also hope it helps you realize that, in dealing with elders with dementia as well as dealing with our children, accepting the responsibility for “being the boss” does not show a lack of love or a lack of respect for self-dignity. It just recognizes that showing love, care and encouragement, and stepping in (and stepping up) as needed to offer protection from bad things happening or bad choices being made, are really just two sides of the same coin.