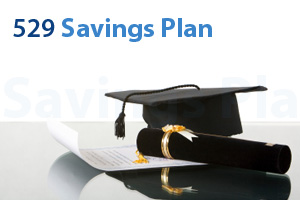 A “Section 529 plan” is a tax-advantaged savings plan designed to encourage saving for future college costs. 529 plans, legally known as “qualified tuition plans,” are sponsored by states, state agencies, or educational institutions and are authorized by Section 529 of the Internal Revenue Code.  All fifty states and the District of Columbia sponsor at least one type of 529 plan.

College savings plans generally permit a college saver (also called the “account holder”) to establish an account for a student (the “beneficiary”) for the purpose of paying the beneficiary’s eligible college expenses. An account holder may typically choose among several investment options for his or her contributions, which the college savings plan invests on behalf of the account holder. Investment options often include stock mutual funds, bond mutual funds, and money market funds, as well as, age-based portfolios that automatically shift toward more conservative investments as the beneficiary gets closer to college age. Withdrawals from college savings plans can generally be used at any college or university.

Investing in a 529 plan may offer college savers special tax benefits. Earnings in 529 plans are not subject to federal tax, and in most cases, state tax, so long as you use withdrawals for eligible college expenses, such as tuition and room and board.

Because of those advantages, 529 plans have become an increasingly popular way for grandparents to set aside money toward helping to pay for their grandchildren’s future college expenses.

However, unlike in the case of Uniform Transfers to Minors Act (“UTMA”) accounts, a grandparent who funds a 529 plan is not a mere custodian of the funds for the benefit of the grandchild beneficiary. Rather, the holder of a 529 plan remains the owner of the funds held in the account, and therefore has the legal right to withdraw those funds at any time and for any purpose.  However, if you withdraw money from a 529 plan and do not use it on an eligible college expense, you generally will be subject to income tax and an additional 10% federal tax penalty on earnings.

Because of those legal characteristics, the ownership of a 529 plan can be very problematic if the grandparent later needs nursing home care and applies for Medicaid assistance to help pay for that care.

Unfortunately, the Medicaid rules, following the provisions of Section 529 of the Internal Revenue Code, do not see it that way. They view the funds as still belonging to the grandparent.  Because the Medicaid rules condition eligibility for benefits upon owning only a very limited amount of assets (for a single or widowed applicant, less than $1000 in Missouri and less than $2000 Illinois), the ownership of a 529 plan will almost certainly result in the denial of a Medicaid application for “excess resources.”

To add insult to injury, it appears that the only way for a prospective Medicaid applicant to address that concern is to withdraw the funds from the 529 plan and pay the 10% penalty and any taxes owed.

I wish that I could somehow the wave a magic wand and offer a simple and effective solution to this dilemma, but unfortunately, that is not the case. At least for now, the best I can offer is a word of caution to grandparents were considering investing in one or more 529 plans for their grandchildren. At least from a Medicaid eligibility perspective, it is probably best, in that situation, to give money to your children on the condition, and with the unwritten understanding, that they are to use the gifted money to set up 529 plans for your grandchildren who are the intended beneficiaries.

Of course, if you do that, you need to be aware of two remaining concerns.

First, as owners, your children will have the legal right to withdraw the money for personal use (albeit with adverse tax consequences) rather than holding it for your grandchildren. You need to trust that they will not do so.

Second, you need to be aware that any such gifts or other transfers of assets made within five years prior to applying for

Medicaid are potentially subject to Medicaid “transfer penalties” which would delay your eligibility for benefits. However, there is a good chance that no penalties will be imposed if you set up and begin the funding of the 529 plan more than five years before applying for Medicaid, and the annual contributions that you make within the last five years are consistent with patterns of giving that you established more than five years ago.